The Novotel  Hotel where we stayed for two  days.  The small  bus from Sahara Adventures  picked us up from here to take us Ayres Rock for several days … Ayres Rock is 500 kms. south of Alice Springs …. one day to get down there, three days camping out and half a day to get back. That meant we had two days to look around Alice Springs.

Alice Springs is a remote town in Australia’s Northern Territory, situated some 1,500km from the nearest major city. It’s a popular gateway for exploring the Red Centre, the country’s interior desert region. Its 1872 origin as part of the Overland Telegraph Line is preserved in the vintage buildings and equipment at the Alice Springs Telegraph Station Historical Reserve.

Alice Springs  is a fascinating town in the heart of the MacDonnell Ranges. In recent times, with the upgrade of the airport at Uluru, Alice Springs has become a bit of a tourist Cinderella. It was once the major entry point to Central Australia. Now it is often by-passed by tourists eager to see sunrise and sunset over Uluru and rush off to their next destination. That is a pity because a committed traveller could easily spend a week in Alice Springs and not see all the sights and attractions. It deserves this amount of time because of the extraordinary beauty of the ancient MacDonnell Ranges, the excellent walks in the area (which only should be attempted in the winter months), the idyllic gorges dotted along the MacDonnell Ranges, and the range of attractions (particularly the flora and fauna of the Desert Park) which are easily accessible from the town centre. It is the second largest town in the Northern Territory and still is an ideal starting point for any comprehensive overview of Central Australia because both Uluru (Ayers Rock) and Kata Tjuta (The Olgas) are within easy driving distance. Over the years Alice Springs has achieved almost mythical fame and has become a popular subject for poems, songs and novels of which the most famous is Nevil Shute’s ‘A Town Like Alice’ in which Joe Harmon describes it as a ‘bonza place with plenty of water’. It is much more than that today.

Connect to stories of Afghan cameleers, flying doctors and plucky pioneers in the many heritage sites around the town. Visit the Albert Namatjira Gallery, peek into the traditions of the Arrernte people at the Strehlow Centre and browse contemporary Aboriginal art along pedestrian-only Todd Mall. You can buy central Australian art at competitive prices at the Desert Mob Festival in August/September. From desert landscapes in water colours to dot paintings of the seasons, Alice Springs is bright with Aboriginal art.

Alice Springs was named after Lady Alice Todd, the wife of South Australia’s Postmaster-General, Sir Charles Todd, who was the driving force behind the construction of the Overland Telegraph Line between Adelaide and Darwin. The actual springs, which lie north-east of the town, were discovered in 1871 and one of the surveyors on the Overland Telegraph team, either William Whitfield Mills or John Ross, gave the site its name. In his remarkable Geographic Travels in Central Australia, the explorer Ernest Giles refers to Todd as the “scientific and well-known gentleman, Mr Todd, C.M.G., the pushing Superintendent of the South Australian Telegraph Company.”

This sign and the Flying Doctor’s Memorial, seven kilometres west of Alice Springs, is dedicated to John Flynn (1880-1951), founder of an airborne medical service providing emergency and primary health care to people living in Australia’s Outback.

Since its founding in 1928 as the Aerial Medical Service, the Royal Flying Doctor Service, informally known as the Flying Doctor, has helped thousands upon thousands of people unable to reach a hospital or a general medical practitioner due to the vast distances of the Australian Outback.

John Flynn, a minister of the Presbyterian Church and the first superintendent of the Australian Inland Mission, saw the Outback’s need for access to medical services and founded in 1928 the Aerial Medical Service in Cloncurry, Queensland.

The Royal Flying Doctor Service, a not-for-profit organisation, soon had sections in many parts of Australia with its Central Operations based in Alice Springs from 2001. The Alice Springs base had been opened in 1939.

The Cloncurry base remained operational until 1964 when it was relocated to Mt Isa.

The Flying Doctor’s Memorial is in John Flynn’s Memorial Historical Reserve where Flynn’s ashes and those of his wife Jean are buried.

It was very strange walking around Alice Springs and seeing extensive green lawns and extensive gardens with lots of lush palms growing in a city in the dry  Australian desert. It makes a major difference when you realise it all runs vast quantities of underground artesian  water. Even though Alice Springs is outside the area of the Great Artesian Basin in Australia, it is interesting to read about the details of  artesian  water. 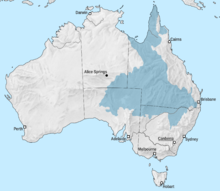 The Great Artesian Basin, located within Australia, is the largest and deepest artesian basin in the world, stretching over 1,700,000 square kilometres (660,000 sq mi), with measured temperatures ranging from 30–100 °C (86–212 °F). The basin provides the only reliable source of fresh water through much of inland Australia.[1]

The Basin underlies 23% of the continent, including the states and territories of Queensland (most of), the Northern Territory (the south-east corner of), South Australia (the north-east part of), and New South Wales (northern part of). The basin is 3,000 metres (9,800 ft) deep in places and is estimated to contain 64,900 cubic kilometres (15,600 cu mi) of groundwater.[2] The Great Artesian Basin Coordinating Committee (GABCC)[3] coordinates activity between the various levels of government and community organisations.

Set at the base of the MacDonnell Ranges mountains, this upscale casino hotel is adjacent to the Alice Springs Convention Centre and 1.4 km from Alice Springs Golf Club.

The understated rooms provide free Wi-Fi and flat-screen TVs, plus minibars, tea and coffee making facilities, and room service. They also have balconies (some with mountain views). Upgraded rooms and suites add Aboriginal artwork and iPod docks. Suites (some with 2 levels) also have separate living spaces.

Amenities include a spa, an outdoor pool, a hot tub and a fitness centre. There are 4 restaurants (including a poolside cafe) and 3 bars. Mountain bikes and parking are free.

The Todd River is an ephemeral river in the southern Northern Territory, central Australia. The origins of the Todd River begin in the MacDonnell Ranges, where it flows past the Telegraph Station, almost through the center of Alice Springs, through Heavitree Gap at the southern end of Alice Springs and continuing on for some distance, passing through the western part of the Simpson Desert, as it becomes a tributary of the Hale River, and eventually flowing into Lake Eyre in South Australia.[1]
The Todd is in a very arid part of Australia and has zero to very low flow during 95% of the year.[2] When it does flow, it carries a heavy sediment load picked up from the grazing land around the Bond Springs homestead which lends its waters a milky chocolate colour and renders them completely opaque.
The Todd River  when it is dry …

The Todd River when it is  in flood …….. See  this website with the many photos of the Todd River  being dry or in flood.

Reminders of the past in Alice Springs  ….. The Aviation Museum ……

One of  the first planes to come to Alice springs long before the  airport was constructed ….. a flying doctor plane ?

The telegraph operator living in a big tent and operating the The telegraph … connected to The Australian Overland Telegraph Line.

The Australian Overland Telegraph Line was a 3200 km telegraph line that connected Darwin with Port Augusta in South Australia. Completed in 1872, the Overland Telegraph Line allowed fast communication between Australia and the rest of the world. An additional section was added in 1877 with the completion of the Western Australian section of the line. It was one of the great engineering feats of 19th century Australia[1] and probably the most significant milestone in Australia’s telegraphic history

By 1855 speculation had intensified about possible routes for the connection of Australia to the new telegraph cable in Java and thus Europe. Among the routes under consideration were either Ceylon to Albany in Western Australia, or Java to the north coast of Australia and then either onto east coast, or south through the centre of the continent to Adelaide.

Competition between the colonies over the route was fierce. The Victorian government organised an expedition led by Burke and Wills to cross the continent from Menindee to the Gulf of Carpentaria in 1860. Although the route was traversed, the expedition ended in disaster. The South Australian government recognised the economic benefits that would result from becoming the centre of the telegraph network. It offered a reward of £2000 to encourage an expedition to find a route between South Australia and the north coast.

Camels hauled wagons loaded with wool to the rail head at Oonadatta …..

An early truck  being used  around Alice springs, otherwise camels were used extensively. Most of the  camels were released in the mid 1920’s when motor vehicles began operating in the central areas of Australia. They established free ranging  herds in the semi arid deserts of Australia.

Camels in  the  supplying  of goods to Alice Springs,  cattle  stations,  missions ……