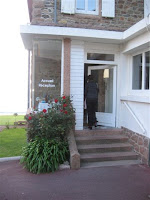 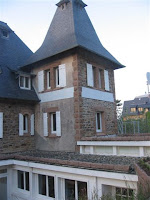 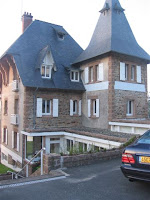 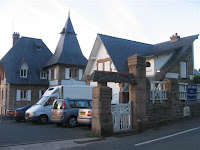 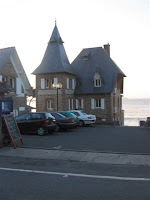 There was a little ancient seaside town of Perros Guirec with the old stone built buildings everywhere. The grey slate roofs where common as in all the towns and villages of France. The little hotel we stayed in for two nights had a hand-built – stone wall on the road boundary with a covered a litch – gate at the end of the wall. See the photographs above. The actual hotel is the last building on the left. You went down some stone stairs to the entry office. It was right on the sea and very picturesque.

Our hotel room was upstairs overlooking the green spacious garden of the adjacent property. We had to walk and carry everything upstairs …. There was no lift as the hotel was very old. We sorted out only a bagful of clothes and food from our main suitcases ….. to take up to our room. We left the car parked and locked in the generous carpark near the street from our hotel.

A glassed – in breakfast room was on the very lowest level ie. the hotel was on three levels. A spacious green lower lawn then extended outwards to the sea.

Meal-wise, when we arrived the first night, we went to little local French restaurant. In the morning we went down the breakfast room and had a generous French breakfast with an abundance of croissants, jam, and coffee. The next morning we chose to have breakfast in our room. We had brought a packet of Weetbix from Australia (breakfast cereal) and a packet of powdered milk which we had been slowly eating over the last two weeks. We had also brought our plastic plates and cutlery from our picnic basket at home. We had a Birko …. An Australian invention. It is a wide mouthed stainless steel electric jug which could boil eggs for boiled eggs for our lunch or you could place a carton of soup at night in the boiled water with cut in the top. It would heat it up to the right temperature in the boiling water. We could also boil water for our little Thermos we had, for our midday coffee.

For breakfast, I would make up a Thermos of milk (plus for our midday coffee) and pour it onto two Weetbix each. We could have a cup of coffee each and maybe have a boiled egg.

Before breakfast, I went off exploring along a wide sea-side causeway which gently curved for up to kilometre on the front-line of this little ancient town and the sea. The tide was right in and the waves receded out over a ten metre wide beach of 100 mm sea worn stones. These gave a wonderful stone – clinking sound every time the water and froth receded. Then the next wave would come in and mount over the three metre high stone wall of the causeway and sometimes flood right over the twenty metre wide causeway almost up to the stone buildings. It was a bit of a concern in  walking along the causeway. If you came when the tide was out, there would be a 100 metre wide coarse sand beach and virtually no waves. They had huge tides there.

Of interest, there were some keen black wet-suited surfers there early in the morning, catching the waves on their boogie – boards and surf kayaks. The water was very cold. They would enter the white – frothed boisterous sea via a steep stone ramp that angled down towards the beach. The water was coming in halfway up the ramp. They would be on the edge of the water waiting for the right wave. They would then throw themselves into the water on their boards and swim through the white – froth waves with their finned feet ….. swimming vigorously to catch the distant breaking wave zone. Then they would catch a mounting wave and come right into the still water on their boards. They would turn around and head into wave breaking zone and repeat the process.

It was of great interest with a kayaker who wanted to enter this white frothing maelstrom. If he didn’t catch it right, he and his kayak would be pounded to pieces between the waves and the stone wall. He would be seated in his kayak at the top of the stone ramp. When the right wave came, he would push himself off and dry slide down the ramp towards the wave. As the wave receded, he would be carried out to sea and he could paddle furiously out to the wave breaking zone. He would sit in his kayak waiting for a breaking wave, then catch it into shore then paddle out again to repeat the process.