We went down into the Mediterranean Sea, past the Greek Islands and up to Venice over the May period. We were looking at the Byzantine Empire. We were on a small ship of 350 people only, so the ship can go into small ports that larger ships couldn’t enter.
When we got to Venice, we all disembarked and were put up in the Hilton Hotel and spent two days looking around Venice as part of the tour. Then we all flew home. However Harriet and I stayed an extra two nights in Venice. We stayed in the luxurious Hotel Danieli overlooking the Grand Canal. Seeing it was a life time thing, we indulged ourselves.
_______________________________________________
Dardanelles:
The Dardanelles, formerly known as Hellespont, is a narrow strait in northwestern Turkey connecting the Aegean Sea to the Sea of Marmara. It is one of the Turkish Straits, along with its counterpart, the Bosphorus. Wikipedia
_______________________________________________
Mt. Athos:

Mount Athos has been inhabited since the ancient times and is known for its nearly 1,800-year continuous Christian presence and its long historical monastic traditions, which date back to at least 800 A.D. and the Byzantine era. Today, over 2,000 monks from Greece and many other Eastern Orthodox countries, such as Romania, Moldova, Bulgaria, Serbia and Russia, live an ascetic life in Athos, isolated from the rest of the world. The Athonite monasteries feature a rich collection of well-preserved artifacts, rare books, ancient documents, and artworks of immense historical value.

Although Mount Athos is technically part of the European Union like the rest of Greece, the status of the Monastic State of the Holy Mountain, and the jurisdiction of the Athonite institutions, were expressly described and ratified upon admission of Greece to the European Community (precursor to the EU). The free movement of people and goods in its territory is prohibited, unless formal permission is granted by the Monastic State’s authorities.

An Orthodox spiritual centre since 1054, Mount Athos has enjoyed an autonomous statute since Byzantine times. The ‘Holy Mountain’, which is forbidden to women and children, is also a recognized artistic site. The layout of the monasteries (about 20 of which are presently inhabited by some 1,400 monks) had an influence as far afield as Russia, and its school of painting influenced the history of Orthodox art.

Cloaked by beautiful chestnut and other types of Mediterranean forest, the steep slopes of Mount Athos are punctuated by twenty imposing monasteries and their subsidiary establishments. Covering an area of just over 33,000 hectares, the property includes the entire narrow rocky strip of the easternmost of the three peninsulas of Chalcidice which jut into the Aegean Sea in northern Greece. The subsidiary establishments include sketae (daughter houses of the monasteries), kellia and kathismata (living units operated by the monks), where farming constitutes an important part of the monks’ everyday life. An Orthodox spiritual centre since the 10th century, Mount Athos has enjoyed a self-administered status since Byzantine times. Its first constitution was signed in 972 by the emperor John I Tzimiskes. The ‘Holy Mountain’, which is forbidden to women and children, is also a recognized artistic site. The layout of the monasteries (which are presently inhabited by some 1,400 monks) had an influence as far afield as Russia, and its school of painting influenced the history of Orthodox art. The landscape reflects traditional monastic farming practices, which maintain populations of plant species that have now become rare in the region.

Criterion (i): The transformation of a mountain into a sacred place made Mount Athos a unique artistic creation combining the natural beauty of the site with the expanded forms of architectural creation. Moreover, the monasteries of Athos are a veritable conservatory of masterpieces ranging from wall paintings (such as the works by Manuel Panselinos at Protaton Church ca. 1290 and by Frangos Catellanos at the Great Lavra in 1560) to portable icons, gold objects, embroideries and illuminated manuscripts which each monastery jealously preserves.

Criterion (ii): Mount Athos exerted lasting influence in the Orthodox world, of which it is the spiritual centre, on the development of religious architecture and monumental painting. The typical layout of Athonite monasteries was used as far away as Russia. Iconographic themes, codified by the school of painting at Mount Athos and laid down in minute detail in the Guide to Painting (discovered and published by Didron in 1845), were used and elaborated on from Crete to the Balkans from the 16th century onwards.

Criterion (iv): The monasteries of Athos present the typical layout of Orthodox monastic establishments: a square, rectangular or trapezoidal fortification flanked by towers, which constitutes the peribolos of a consecrated place, in the centre of which the community’s church, or the catholicon, stands alone. Strictly organised according to principles dating from the 10th century are the areas reserved for communal activities (refectory, cells, hospital, library), those reserved solely for liturgical purposes (chapels, fountains), and the defence structures (arsenal, fortified towers). The organization of agricultural lands in the idiorrythmic sketae (daughter houses of the monasteries), the kellia and kathismata (living units operated by the monks) is also very characteristic of the medieval period.

Criterion (v): The monastic ideal at Mount Athos has preserved traditional human habitations, which are representative of the agrarian cultures of the Mediterranean and have become vulnerable through the impact of change within contemporary society. Mount Athos is also a conservatory of vernacular architecture as well as agricultural and craft traditions.

Criterion (vi): An Orthodox spiritual centre since the 10th century, the sacred mountain of Athos became the principal spiritual home of the Orthodox Church in 1054. It retained this prominent role even after the fall of Constantinople in 1453 and the establishment of the autocephalous patriarchy of Moscow in 1589. Mount Athos is directly and tangibly associated with the history of Orthodox Christianity which, in varying degrees, is present in more than 20 nations in the 20th century. It is no exaggeration to say that this thousand-year-old site, where the weight of history is palpable in the countryside, the monuments and the precious collections have been built up over time, has retained even today its universal and exceptional significance.

Criterion (vii): The harmonious interaction of traditional farming practices and forestry is linked to the stringent observance of monastic rules over the course of centuries, which has led to the excellent preservation of the Mediterranean forests and associated flora of Mount Athos.

Closely associated with the history of Orthodox Christianity, Mount Athos retains its Outstanding Universal Value through its monastic establishments and artistic collections. All the monasteries are well-preserved due to on-going restoration projects carried out according to approved plans. The materials used for restoration are traditional and environmentally friendly.

Mount Athos encompasses an entire peninsula of 33,042 ha, an area of sufficient size to maintain a rich flora and fauna that has been well conserved by careful management of the forests and traditional agricultural practices. Although the natural environment is maintained, it is also vulnerable to forest fire, infrastructure development (mainly roads), and seismic activity. Monastic activities have kept their traditional character due to rules which have remained relatively unchanged throughout the centuries, and the evolution of monastic life should not harm the environment.

The property reflects adequately the cultural values recognized in the inscription criteria through the setting of the monasteries and their dependencies, together with the form, design and materials of the buildings and farms, their use and function, and the spirit and feeling of the place.

Mount Athos has an enormous wealth of historic, artistic and cultural elements preserved by a monastic community that has existed for the last twelve centuries and constitutes a living record of human activities.

Mount Athos has a peculiar self-administered system under Hellenic Constitutional Law. While the sovereignty of the Hellenic State remains intact (article 105), management is exercised by representatives of the Holy Monasteries, who comprise the Holy Community (article 105). The Hellenic State has placed the responsibility for the protection and conservation of the natural and cultural property into public agencies, namely the Ministry of Education and Religious Affairs, Culture and Sports, General Secretariat of Culture, through the responsible 10th Ephorate of Byzantine Antiquities, the Centre for the Preservation of the Athonite Heritage, the Ministry of Environment, Energy and Climate Change, and the Ministry of Foreign Affairs (Directorate for Churches – Mount Athos Administration). The monuments are protected by the provisions of the Archaeological Law 3028/2002 “On the Protection of Antiquities and Cultural Heritage in general”, and by separate ministerial decrees published in the Official Government Gazette.

Restoration and conservation works, co-funded by the European Union, are performed by the Hellenic State (10th Ephorate of Byzantine Antiquities and Centre for the Preservation of the Athonite Heritage). There is on-going collaboration between the responsible services of the Ministry of Education and Religious Affairs, Culture and Sports; the General Secretariat of Culture; and other Ministries with the monastic community. However, it should be stressed that the scheduling and execution of all work concerning individual Holy Monasteries requires their consent as well as that of the Holy Community.

Sustaining the Outstanding Universal Value of the property requires ongoing conservation of the buildings including their finishes and mural paintings, as well as of manuscripts and artworks. Studies concerning the installation of infrastructure in the monastery buildings, including fire protection, have been undertaken.

Protection and management of the forests, including provision of major infrastructure, is the subject of specialized programs planned by the monasteries, in cooperation with the Holy Community and relevant scientists.

Promotion of Mount Athos’ cultural heritage includes conferences, publications and more recently the internet. Mount Athos is well-known to the Orthodox Christian world and attracts many thousands of visitors, scholars and pilgrims every year.

Once finalised and agreed upon, the Management Plan prepared by the Holy Community will address forest management in terms of ecological sustainability; road and port (arsana) construction and maintenance; waste management; the need for a consistent approach to conservation for all monasteries; and a risk preparedness plan for all the monasteries and their dependencies.

My photos of Mt. Athos  taken from the ship: 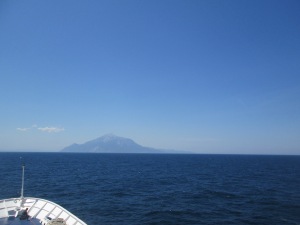 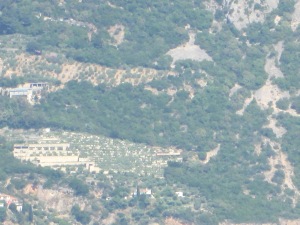 …. One of  the  20  monasteries with agricultural lands which  is  very characteristic of the medieval period  …..

…. agricultural lands  aligned with one of the monasteries …….. 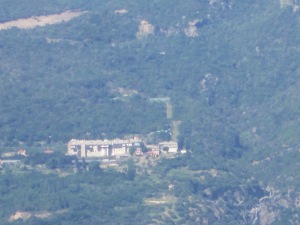 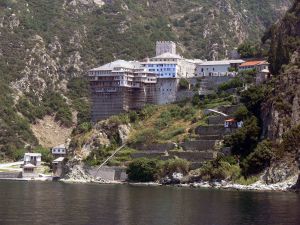