NOTE: I would like  to share with  you  through  these few words, photographs and hyperlinked websites, a 3 Dimensional  experience as though you were  actually there with  us. Click on any photograph and it should enlarge to a different size (view image in cursor list) ….. at least half screen or size full screen. It will be clearer in detail than the photo on the post. It will be as if you were  really there looking at the actual  scene. You are an arm chair traveller with us.

I wish to share with you some experiences of a recent trip we did overseas in May 2008 through the medium of photography and blog sites or recommended websites. On the 8th May we flew from Brisbane to Sydney and boarded a plane which flew straight to Vancouver in Canada …. A long fourteen hour trip!! However this was a lot simpler than flying via Los Angeles (USA customs etc.).

The next day we boarded our ship for a week long cruise to Alaska. Here are some photos of our week long trip in the Veendam operated by the Holland America cruise line. It had 1200 passengers and 600 crew to look after you.

We stopped at two places for excursions right up in Alaska …… Juneau and Skagway. Juneau is the capital of Alaska and Skagway was the dropping off point 500 years ago for the Klondike Gold Rush. The overall excursion was very stable as the ship travelled up the Alaskan Inside Passage. The Inside Passage of the Alaska Panhandle and coastal British Columbia is a coastal route for ocean going vessels along a series of passages between the mainland and the coastal islands. Ships using the route can avoid some of the bad weather in the open ocean, and visit the many isolated communities along the route. It is heavily travelled by cruise ships, freighters, tugs with tows, fishing craft and ships of the Alaska Marine Highway and BC Ferries systems. The name Inside Passage is also used to refer to the ocean and islands around the passage.

The Alaskan portion of the Inside Passage, in the north, extends 500 miles (800 km) from north to south and 100 miles (160 km) from east to west. The area encompasses 1,000 islands, 15,000 miles (24,000 km) of shoreline and thousands of coves and bays. British Columbia’s southern portion of the route is of similar extent, with up to 25,000 miles (40,000 km) of coastline, and includes the narrow, protected Strait of Georgia between Vancouver Island and the B.C. mainland, the Johnstone and Queen Charlotte Straits between Vancouver Island and the mainland, as well as a short stretch along the wider and more exposed Hecate Strait near the Queen Charlotte Islands, though from Fitz Hugh Sound northwards the route is sheltered via the various large islands in that area such as Princess Royal Island and Pitt Island.

The Juneau mining district is a gold mining area in the U.S. state of Alaska.  In 1880 a local inhabitant, Chief Kowee, revealed to prospectors Joe Juneau and Richard Harris the presence of gold in what is now named Gold Creek in Silver Bow Basin. The city of Juneau was founded there that year.

The strike sparked the Juneau gold rush which resulted in the development of many placer and lode mines including the largest, in their time, gold mines in the world: the Treadwell complex of lode mines on Douglas Island (across a narrow sea channel from Juneau) and the AJ lode mine, in Juneau itself. The steep, wet, timber-covered, seaside mountain setting provided water power, transportation, and lumber such that, “extraordinarily low costs of operation make available low grade ore that under conditions only slightly different would be valueless.”

The first claims of what was to become the Treadwell complex were staked in 1881. Mining the Treadwell site began by sluicing residual placers over the lode deposits. Underground mining began with a five-stamp mill operating in 1883. In the mid-1910’s, with 960 stamps grinding ore and tunnels reaching as far as 2400 feet below the surface and extending under the sea, Treadwell was one of the most technologically advanced mines of its day. Up to 2000 people worked at the mine before a collapse allowed the rising tide to flood the tunnels in 1917. All operations at the Treadwell ceased by 1922.

As the Treadwell mines declined and closed, the AJ mine rose in prominence. After years of losses and labor problems, the mine became profitable in the mid-1920’s: with 600 workers it was setting production records. Through the decade, it was the main economic engine of Juneau. In the 1930’s, with 1000 workers, it was an important factor in softening the impact upon Juneau of the Great Depression.

Economic pressures of WWII lead to the closure of the AJ in 1944; this was the end of the dominance of mining in the Juneau economy. Although those two mines are long-since closed, as late as 1980 one of the hydropower plants built to power the AJ was still in use. Fires and time have destroyed most traces of the Treadwell complex; the AJ mine buildings still tower over the Gastineau Channel south of Juneau.

The Juneau mining district; comprising the area between the Canadian border, Lynn Canal, Admiralty Island, and Frederick Sound, has produced over 7 million ounces of lode gold and 80,000 ounces of placer gold.

Alaska, northwest of Canada, is the largest and most sparsely populated U.S. state. It’s known for its dramatic, diverse terrain of wide-open spaces, mountains and forests, with abundant wildlife and many small towns. It’s a destination for outdoor activities including skiing, mountain biking and kayaking. Massive Denali National Park, home to Denali (fka Mt. McKinley), North America’s highest peak, is a site of animal-viewing tours.

Our goal on the excursion were one day stop offs at Juneau and Skagway. 1200 passengers were assigned into one of several groups. Our group was going on a nature walk to teach us about to take better digital natural camera photographs. There were only 14 people in a our group led by Brandon. See the photographs and detail below.

See this website for more detail on Juneau  (Wikipedia, the free encyclopedia)

The Ship To Juneau in Alaska: 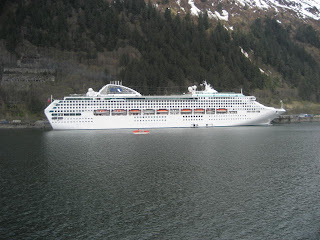 …. A liner similar to the Veendam  moored up in Skagway, Alaska … 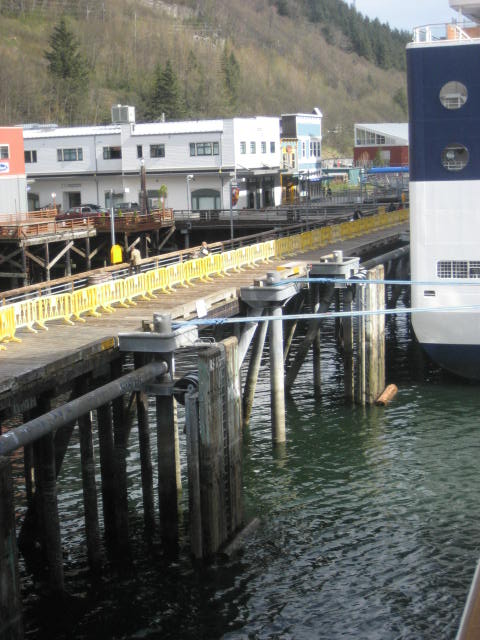 See the following website on Alaska as one of the states of the USA: Why is Alaska a part of the USA and not Canada?

Our goal on the excursion were one day stop offs at Juneau and Skagway. 1200 passengers were assigned into

several groups. Our group was going on a nature walk to teach us about to take better digital natural camera

photographs. There only 14 people in a our group led by Brandon. See the photographs and detail in Post 6 as given below.

See  the next post: OUR CANADIAN HOLIDAY in May 2008 …. Juneau in Alaska ….. The Walk to the Mendenhall Glacier: Post 5