Note: I would like  to share with  you  through  these few words, photographs and hyperlinked websites, a 3 Dimensional  experience as though you were  actually there with  us. Click on any photograph and it should enlarge to  different size ….. at least half screen or full screen size. It will be clearer in detail than the photo on the post. It will be as if you were  really there looking at the actual  scene. You are an arm chair traveller with us.

Harriet and I  went  to Japan  in a very unknowing  way from 05th – 19th April 2017. We went in the Cherry Blossom season which had just started. Pink trees of Cherry Blossom  were out everywhere! It was beautiful. Pink petals plastered the ground everywhere or petals drifted down in the breeze.

Among Tokyo’s many claims to fame, cherry blossoms are at the top of the list. Every year, you can feel the excitement as pink petals known as sakura fill the city in a picture-perfect welcome to spring. Here’s what you need to know to plan your trip to see these fleeting beauties. See this  website: Cherry Blossom Festival 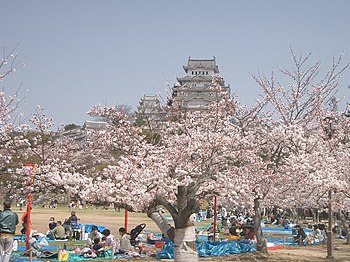 Hanami picnics in the front of Himeji Castle, 2005
Hanami ( “flower viewing”) is the Japanese traditional custom of enjoying the transient beauty of flowers; flowers (“hana”) are in this case almost always referring to those of the cherry (“sakura“) or, less frequently, plum (“ume”) trees.[1] From the end of March to early May, cherry trees bloom all over Japan,[2] and around the first of February on the island of Okinawa.[3] The blossom forecast (sakura-zensen) “cherry blossom front” is announced each year by the weather bureau, and is watched carefully by those planning hanami as the blossoms only last a week or two. In modern-day Japan, hanami mostly consists of having an outdoor party beneath the sakura during daytime or at night. In some contexts the Sino-Japanese term kan’ō (view-cherry) is used instead, particularly for festivals. Hanami at night is called yozakura  “night sakura”. In many places such as Ueno Park temporary paper lanterns are hung for the purpose of yozakura. On the island of Okinawa, decorative electric lanterns are hung in the trees for evening enjoyment, such as on the trees ascending Mt. Yae, near Motobu Town, or at the Nakijin Castle.

A more ancient form of hanami also exists in Japan, which is enjoying the plum blossoms ( ume) instead, which is narrowly referred to as umemi ( plum-viewing). This kind of hanami is popular among older people, because they are calmer than the sakura parties, which usually involve younger people and can sometimes be very crowded and noisy.

Cherry Blossom in flower in  Yanaka City ….. a  very old part of Tokyo.  Tokyo has a reputation as a city that’s all about speed and newness. Everyone’s in a hurry, buildings are constantly being torn down and rebuilt, and in most of the city, nothing’s older than the last World War. But there’s a part of the old shitamachi downtown area that escaped destruction by earthquake and war in the twentieth century, where you can experience what’s left of an older version of the city. It’s called Yanesen, from the initials of the three neighborhoods Yanaka, Nezu and Sendagi. It’s the place to go if you love winding alleys, small shops, and appreciate the appeal of a place that’s a bit shabby and worn around the edges.

Further Cherry Blossom in flower in Yanaka City ….. and many pink  petals in the road kerb.

Cherry Blossom Festival ….. it was raining that day so everyone is under umbrellas ……

Cherry blossoms  out at  the Temple Kiyomizo dera,  an independent Buddhist temple in eastern Kyoto.