From the website: Innot Hot Springs  Town in Queensland 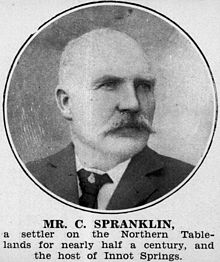 “Mr C. Spranklin, a settler on the Northern Tablelands for nearly half a century, and the host of Innot Springs”

The hot springs were first discovered by Europeans in the early 1870s when John Atherton was exploring the area for grazing opportunities.[8] However it seems the springs were ignored until 1885 when Charles Overend Garbutt, the owner of Woodleigh Station, rediscovered them and learned from the local Aboriginal people that the springs had healing properties. In the Victorian era, mineral springs were widely believed to have theraputic benefits obtained through bathing in the water and drinking the water. Perceiving the commercial opportunities, a Russian-born man, Antonie Antonevic leased 10 acres around the springs on 1 April 1886. The lease passed through a number of people’s hands before it was taken up by (Neil) Charles Spranklin in the late 1890s, who is generally regarded as the major force in developing the springs.

By July 1888 there was a two-storey house with bathing sheds by the springs and in February 1891, the leaseholder Henry Faasch was described as being able to accommodate only 12 patients, but was in the process of erecting a hotel.[10][11] As the water in the springs was too hot for bathing, the hot spring water was piped into bath tubs at 6am each morning and left it to cool until late morning when the guests could comfortably bathe in it.[6] In 1900, Spranklin built four new bathrooms described as “a much needed improvement”.[12]

In the 1900s, Spranklin established a cordial factory where he bottled water from the springs and shipped it to Europe as a health treatment.[13] In 1912 it was proposed that the hot springs were one of three “beauty spots” in the Cairns hinterland that must be preserved; this was prior to legislation to create national parks in Queensland.[14] On 7 October 1918, when Spranklin was absent from the hotel, a fire broke out. The maid Nellie Hogg (Spanklin’s step-daughter) initially fought the fire using water from jugs and then, with the help of others, managed to save the hotel, although there was £50 worth of repairs required.[15] On 13 March 1929 Charles Spranklin died aged 75 years in the hospital at Herberton following a 12-month illness.[16] He was buried in Herberton Cemetery on 14 March 1929.[17] In July 1930 James Thomas Spranklin (son of Charles) announced he would take over the hotel, but he died in January 1931.[18][19] Later that month, Jack and Mabel McBride became the owners of the Springs Hotel.[9]

Lower Nettles Provisional School opened circa July 1911. In July 1916 it became a half-time school in conjunction with Coolgarra State School, meaning the two schools shared a single teacher. It closed later in 1916.[20]

I went wading across a shallow area of the creek looking for a shallow pool I could sit in and be warm.  Just as well I had shoes on my feet as I had to get out very quickly.  The water was just boiling and if I didn’t have shoes on my feet, my bare feet would have been really burnt. I was told by a local man the water is heated 600 metres below  the ground before it comes up as the Innot Hot Springs.

To see the next activity we were involved with over the week we were up on the Atherton Tablelands, see this post: