Pisa is situated on the banks of the river Arno, in the North-West Tuscany region of Italy – about 80 km from Florence and 10 km from the sea. Pisa is one of Italy’s most popular touristic centres. This town is closely associated with the well-known Leaning Tower.

Pisa was never much more than a modest fishing village before the growth of the Roman Republic. With the Portus Pisanus – the Pisan port – serving as a vital naval base for the Romans during the Gallic wars, as well as during other colonizing ventures across the Spanish coast, the city grew in importance and strength as an official ally of Rome. By the time of the Empire, begun under Caesar Augustus in the 1st century A.D., the city was a thriving colonia, renowned for its skilled tradesmen and shipbuilders.

Unfortunately, the 13th century would go on to see the city’s power decline dramatically; this occurred because of continued internal fighting among the Italian city-states – most particularly the damaging wars against the Guelph cities of Tuscany, led by Florence.

In the 16th century A.D., however, during the reign of the Medici, the city regained some peace and prestige as it flowered in a cultural renaissance. Galileo Galilea, the great astronomer, was born in Pisa in 1564 and attended the city’s university for some years. Throughout the following century, the university grew in strength and importance, various civil offices were instituted, and many important public works were constructed, including the Aqueduct of Asciano (1601) and the Canal of Navicelli (1603.)

Medici rule over Pisa ended when the Lorraine Government, by means of the Treaty of Vienna, secured sovereignty for the city under the Granduchy of Tuscany in 1738 A.D. Pisa would eventually become officially incorporated into the Kingdom of Italy by approximately 1860.

The Leaning Tower Of Pisa

The famous “leaning” tower of Pisa was begun in 1173, as inscribed on a plaque carved at the entrance of this most unusual structure. Situated in the Piazza dei Miracolo, it stands alongside the accompanying Cathedral, Baptistry and Monumental Cemetery.

The building of the tower began straight off with some constructive discrepancies, most particularly the unsatisfactory depth of the foundations, which go down just three metres into dry stony earth. Work on the tower was halted after the construction of only three floors due to these foundational problems, which were already causing the tower to lean. Throughout the tower’s history, construction continued to be halted periodically, primarily due to political disruptions wars with the city of Florence, among others. In 1275, over a century after it was first begun, three more floors were added to the tower. Another six were built in 1284.

Although the final lean cumulated at 14 feet out of line, the long delays during the tower’s construction actually facilitated its stabilisation,  as it was able to settle more firmly into the ground gradually with each era of construction. And the tower remains standing today, its unusual lean making it one of the most famous of Italy’s many architectural wonders.

Admission to the tower costs approximately 15 euros (extra for additional attractions). One hour train ride from Florence. – The climb is not too strenuous and rewards the hiker with a beautiful view of the city!

(It is recommended to get to the Tower early, and visit it first before moving on to other buildings in the Piazza).

Although Pisa is best known for the world famous Leaning Tower, it is not the only thing worth seeing here. Other architectural and artistic marvels of this beautiful city include:

·        Piazza del Duomo – the square is known as the Campo dei Miracoli – the Field of Miracles. The famous tower and the imposing cathedral are located here

·        Baptistry – a circular building with a large round Romanesque dome located near the cathedral and leaning tower, with excellent acoustics. It houses sculptured decorations and provides a fine view of the city at the top

·        Campo Santo a very large cemetery building with a collection of ancient Roman sculptures and pre-Renaissance paintings by the “Master of the Triumph of Death”.

The Leaning Tower Of Pisa

The famous “leaning” tower of Pisa was begun in 1173, as inscribed on a plaque carved at the entrance of this most unusual structure. Situated in the Piazza dei Miracolo, it stands alongside the accompanying Cathedral, Baptistry and Monumental Cemetery.

It was interrupted several times by wars, debt and while engineers worked on solutions to correct the lean. We now know that without these interruptions that allowed the soil to compress under the tower, it would have certainly toppled over. Pisa Tower was eventually completed in the mid-1300s. 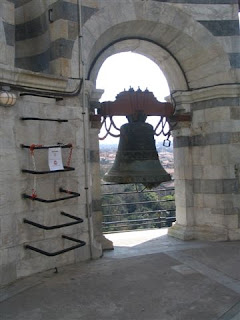 Harriet and I walked up to the top of the tower which equals 251 steps. There is no handrail so you have to be  very careful about going near the outer step. You could otherwise fall 60 metres to the bottom if you were up at the top platform as shown in  the next photo.

We then walked another flight of steps to the  very top. We then had views over modern Pisa in 2005. See the next photo and the ones after that. 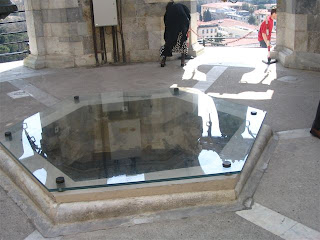 A large sheet of thick glass covers the cylindrical space that descends to the bottom of the tower. 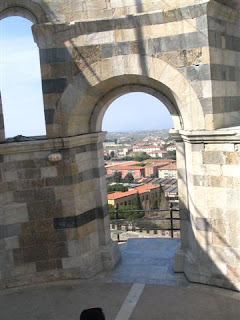 Views  from the Top of the Tower: 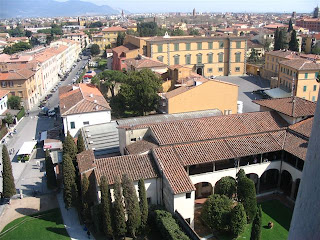 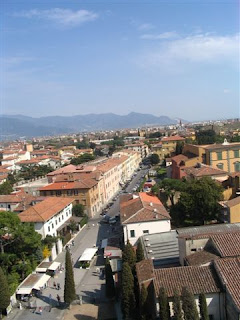 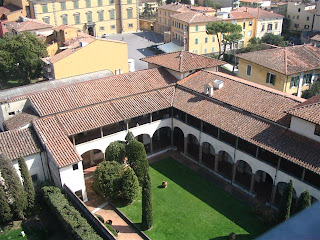 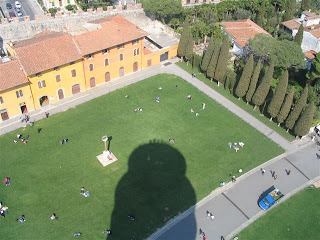 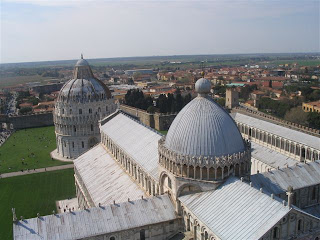 In 1063 Pisa’s fleet had just defeated the Saracens in Palermo, and the spoils of this conflict provided the funds to start building the Cathedral. At the time Pisa was one of the superpowers of the Mediterranean Sea and needed a Duomo that would match its prestige. The architect Buscheto combined Eastern architecture, Byzantine features, and Lombard decoration to create a new style, called ‘Pisan Romanesque’. A style that expanded from here to many areas under Pisan control.

Enlarged in 1118, it was the biggest Cathedral in Europe for almost a century and the pride of the city. If you look on one side of the edifice, you’ll notice where the new part was added, in prestigious marble instead of the poorer sandstone from Livorno. 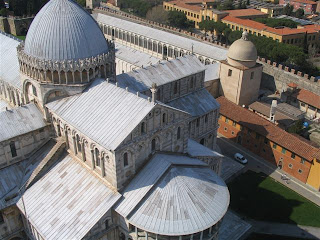 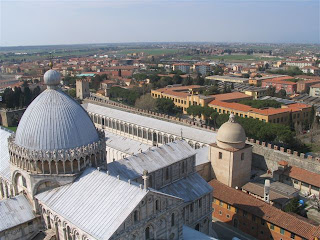 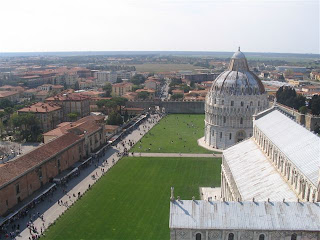 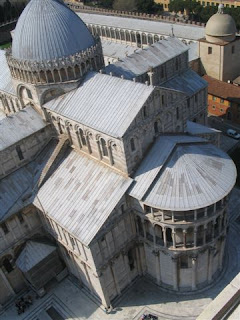 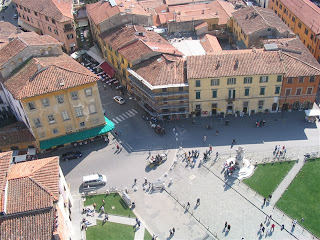 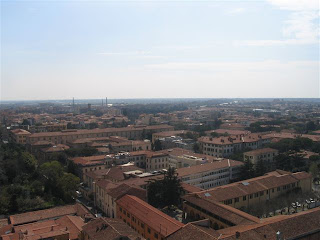 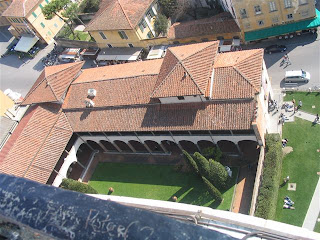 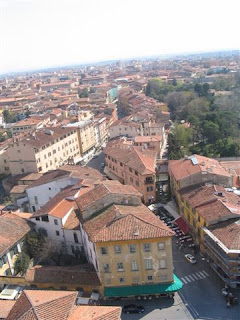 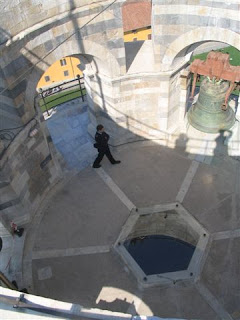 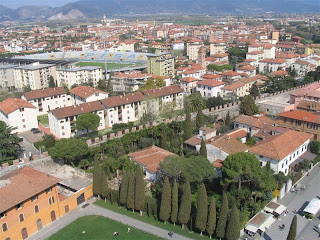 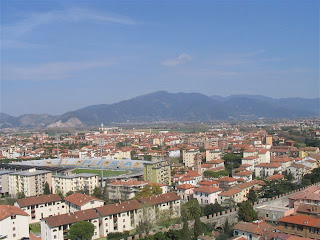