See: The Deep Valley of the Mills: 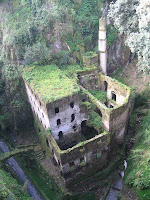 Week 1 = Sorrento: We went on a  train down to Sorrento on the southern part of Italy … four hours from Rome. Then we saw by bus over the whole week by bus the following:

Harriet gained the location where we going to stay in Sorrento  off the Internet. The owner wrote back in his email and said that when we  got down to Sorrento Station on the train, we were to get off and walk down into the big square outside … Tasso Square, ring him on his mobile number and  he would come down and pick us  up. Tasso Square  turned out to be a big square  constructed in 1864 and is the hub of life in the city, brimming with people, cafés, history and art.

We were staying in a beautiful little  unit in the building up on a hill in the town of Sorrento. See the photos below of the unit in the cobbled driveway and the terracotta rooves we would look out on through the window of our unit. When you  went outside, you would  look out on the Mediterranean Sea  in the distance. 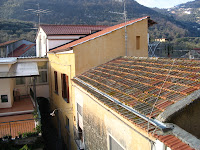 Every day we would walk down and back to our unit and we would pass through a narrow section of the access road. The access road had a stone wall on the outer edge which you could look over. The outer edge fell as cliffs 150 metres ++ to a Y shaped valley below. In the bottom of the valley was small Y shaped stream and old stone building as a ruin with green foliage growing over the roof and up the cliff face in some areas. The building had a big stone chimney and had a real mystique and a sense of ancient history about it. Because we couldn’t speak Italian, we couldn’t ask anyone about it. I would  photograph it going down in the morning  with the early morning  coming from the east over the Mediterranean Sea  and  I would  photograph it  coming home with the western sun casting many shadows  and light patterns on the old stone building and the cliff faces. See the photographs above.

It was only when I came home in May and I was looking up Sorrento websites on the Internet that I found one website with photos of this old ruined building. The valley was called ‘The Valley of the Mills’.

In the historical centre of Sorrento, behind Tasso Square, it is possible to admire from above – in a suggestive perspective – a natural extraordinary spectacle: The Deep Valley of the Mills. The Deep Valley encircles on the south- east side, the tuffaceous rock of the present historical centre of Sorrento; observing it from above a characteristic rift of the rock is visible, that carves profoundly and transversely the tuffaceous platform.

This incisive rift originated from the vastest eruption which shook the Mediterranean many years ago. The potent eruption filled the entire calcareous valley with debris between Scutolo Point and the Cape of Sorrento; the waters which passed through the valleys – finding them clogged up with volcanic materials – searched for a new path towards the sea cutting progressively through the tuffaceous bank. The valleys became privileged places of the human’s settlement. The pre-historic cave of the Conca (Nicolucci Cave), on the uphill of the Valley of Large Seashore (Marina Grande) and the settlement of Gaudo in Piano of Sorrento, remain two tangible traces of this phenomenon.

The Valley of the Mills is incised by two streams of water: Casarlano-Cesarano and Saint Antonino. The lack of water has contributed to form very narrow gorges, only in the point where the two streams of water meet the gorge widens and forms a vast area at the feet of the Villa “La Rupe”. The name Valley of the Mills, derives from the existence of a mill – functioning since the beginning of the ‘900’s – used for grinding wheat. Attached to the mill, rose a sawmill which furnished chaff to the Sorrentine cabinet makers.

Everything is completed by a public wash-house used by the women of the people. The creation of Tasso Square, since 1866, determined the isolation of the mill area from the sea, provoking a sharp rise of the percentage of humidity, which made the area unbearable and determined its progressive abandonment. The new microclimate favoured the development of a thriving and spontaneous vegetation in which the dominant element is the Phillitis Vulgaris, a splendid and rare model belonging to the fern family. Today it is possible to have access to the remaining part of the Deep Valley crossing antique ramps engraved into the tuff with entrance from a trapdoor near the Stragazzi parking.

What is old? Here in the  ‘The Valley of the Mills’,  you can see a wheat grinding mill from 900 AD. Australia, where I come from, is a very young country with only 250 years of recorded history when Captain Cook sailed into Botany Bay from England in 1771.

My suggestion: Equip yourself with binoculars and camera and observe from above the remains of the mill and the splendid savage vegetation. The best position is Fuorimura Street, behind Tasso Square.

Other Views of Sorrento:

Walking to Lubrense: Lubrense is a nearby small town within walking distance from Sorrento.

Harriet walking along the track to Lubrense …..

Looking back at Sorrento  where we have come from ….. buildings are looking smaller …… See the photos above and below.

There is a lot of whimsical mystique here with the stone wall.

Olive trees in the orchard ……

The driveway ends by going under an arch in the building …..

The green moss  on the stone and  the enclosed nature of the driveway ….. is very attractive.

My wife Harriet loves the beauty of this china ….. especially the blue  and white glazing ….

There were many hotels on the cliff overlooking the Mediterranean sea. One with ready  access was the Europa Hotel …..

We walked off Tasso Square ….

We would walk into the gardens and look around and photograph the beautiful gardens. We would even walk into the hotel as though we  were guests  there …..