Note: I would like  to share with  you  through  these few words, photographs and hyperlinked websites, a 3 Dimensional  experience as though you were  actually there with  us. To see each photograph in a very clear way as though you were  with us by clicking the right side of your cursor. It should say: ‘Open in a new window’ or ‘Open image in a new tab‘. Look at the tab on the edge of the upper screen. Each photograph will come up very clear. You are an arm chair traveller with us.

The Island and The Sea …. Brief Description

Perched on a rocky islet in the midst of vast sandbanks exposed to powerful tides between Normandy and Brittany stand the ‘Wonder of the West’, a Gothic-style Benedictine abbey dedicated to the archangel St Michael, and the village that grew up in the shadow of its great walls. Built between the 11th and 16th centuries, the abbey is a technical and artistic tour de force, having had to adapt to the problems posed by this unique natural site.

From Wikipedia, the free encyclopedia
For other uses, see Mont Saint Michel (disambiguation). 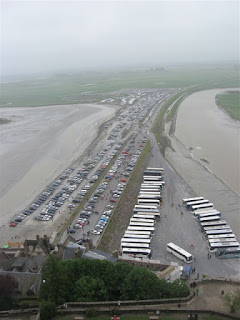 An aerial photograph showing a long line of cars and many buses parked in the Le Mont Saint-Michel carpark. 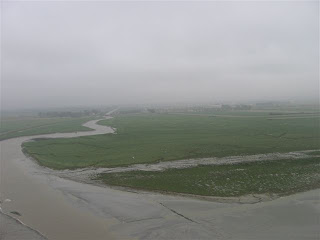 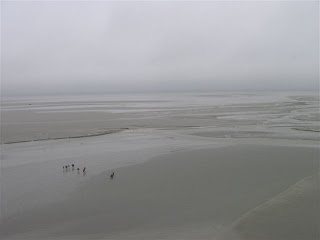 People out on the sand around Le Mont Saint-Michel. Do these people know that the tides can vary greatly, at roughly 14 meters (46 ft) between high and low watermarks? Popularly nicknamed “St. Michael in peril of the sea” by medieval pilgrims making their way across the flats,  (see the photo below)  the mount can still pose dangers for visitors who avoid the causeway and attempt the hazardous walk across the sands from the neighboring coast. 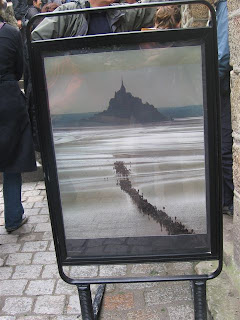 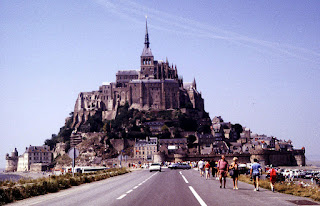 …… The generous causeway which has built in recent years to Le Mont Saint-Michel  …..  this is in comparison to medieval pilgrims making their way across the flats and calling it “St. Michael in peril of the sea” by   ….. 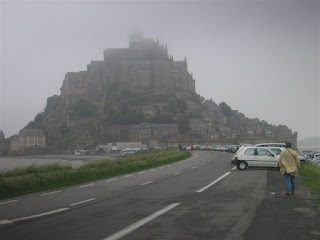 http://vinz1966.free.fr/En/Sommaire.htm …… for the following interactive pages: Visit to the Abbey (in three areas …. 1st Level, Intermediate Level and Top Level), History of the Abbey, Chronology, (1200 years), Glossary, Links and References

The Town Before The Abbey  …….  the town with shops and cafes which cater for the crowds of people going through the Abbey …. 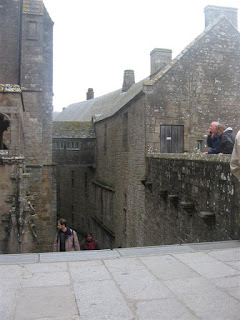 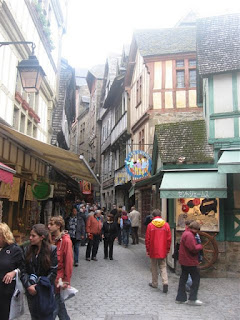 In the 11th century, William of Volpiano, the Italian architect who had built Fécamp Abbey in Normandy, was chosen by Richard II, Duke of Normandy, to be the building contractor. He designed the Romanesque church of the abbey, daringly placing the transept crossing at the top of the mount. Many underground crypts and chapels had to be built to compensate for this weight; these formed the basis for the supportive upward structure that can be seen today. Today Mont Saint-Michel is seen as a building of Romanesque architecture. 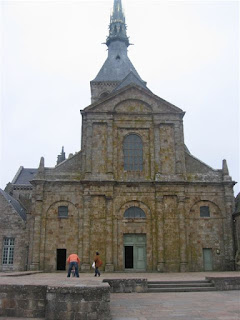 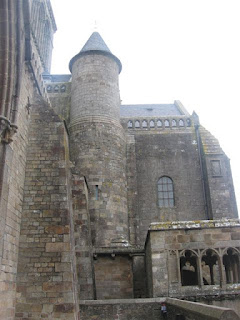 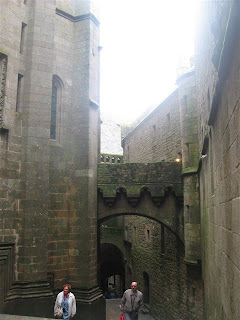 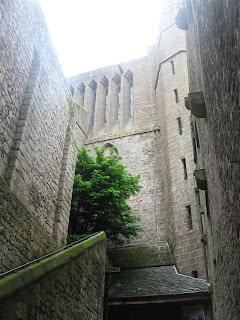 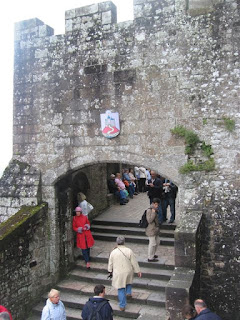 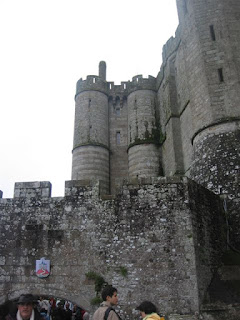 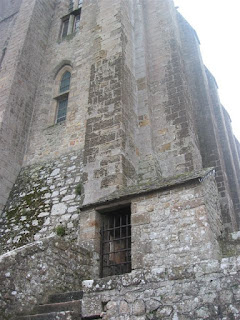 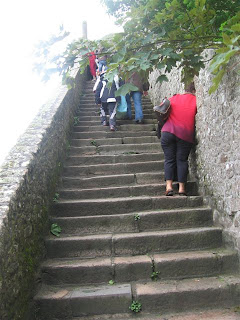 …… Visitors to Mont Saint-Michel climbing the many stairs on the mountaintop monastery this island-mountain ….. 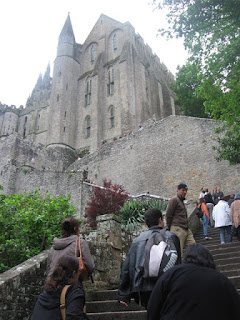 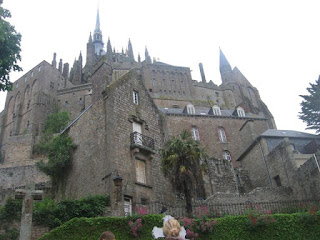 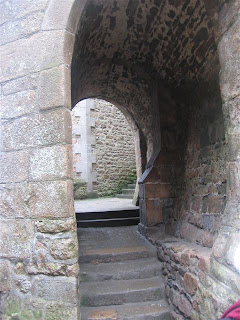 Mont St Michel is a monastery on an island-mountain. At the top of the hill is a charming cloister garden started in the thirteenth century. Today the garden is planted with herbaceous plants. They would not have been here during the Middle Ages but they create an unexpectedly soft domestic character to a dramatic place with dramatic views. 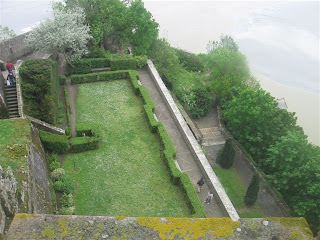 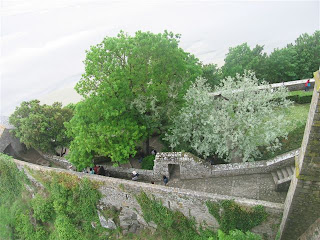 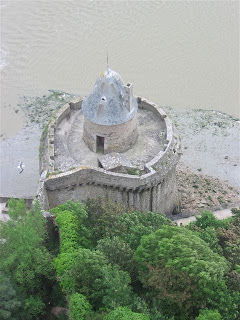 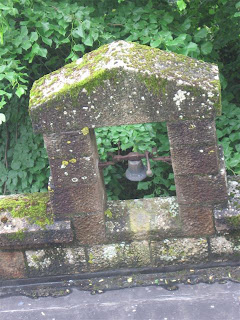 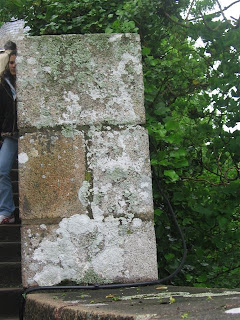 The Interior Courtyard …… About the garden, we know that various establishment experiences have been tempted in the course of centuries but it seems that problems of waterproofness have always aborted the project. The garden we admire today was built during the restoration of 1965. Suspended between sky and earth, the effect is emphasized by the triple open bay in the west wall, which was probably used, originally, to communicate with the third building of The Merveille that was never built. 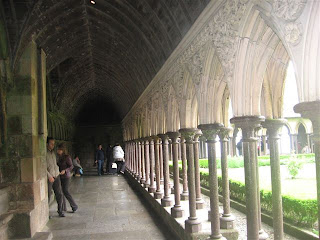 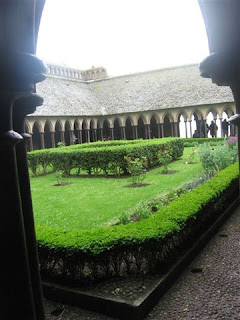 …… The cloister garden is a formal internal garden and is a very restful green against the brown of the stonework ….. 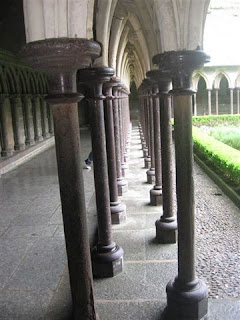 ….. this is a work of formal art in getting all the fluted columns to be so evenly placed around the cloister garden …. 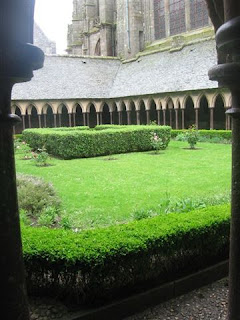 Trip 4: CHATEAUX de VILLANDRY …. The Gardens on the East Side (Chateau of the Loire Valley) = Post 5