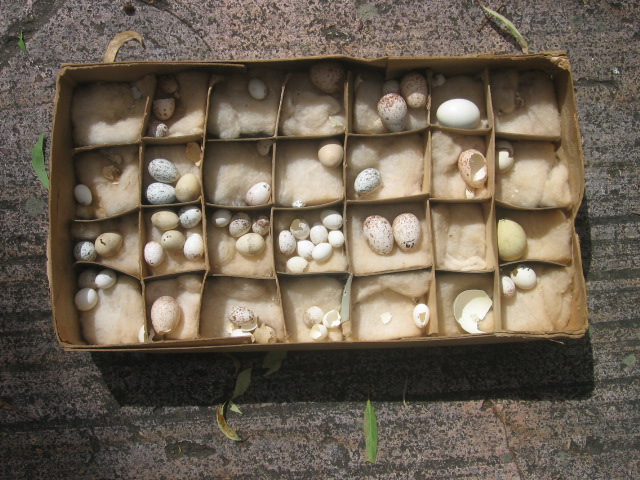 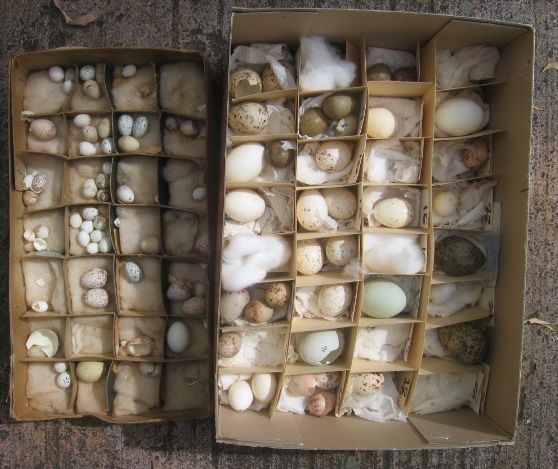 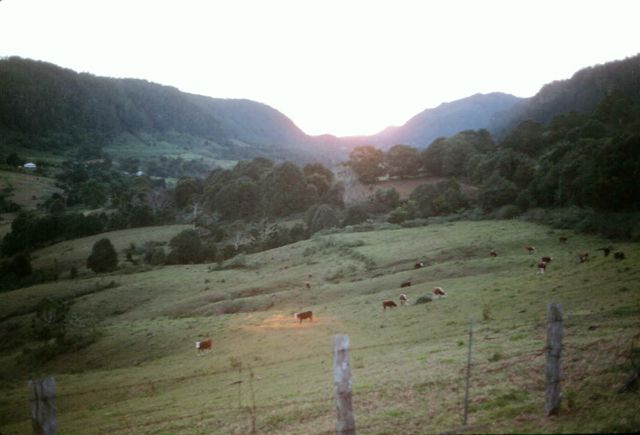 To look closely at the photos, just click each photo and they will enlarge to screen size.

I, Ken Aitken grew up in the 1950’s and 1960’s at Wilsons Creek, up in the mountains out from Mullumbimby in Northern New South Wales, Australia. I was raised on a banana plantation amidst the steep slopes of rainforest and wet sclerophyll (gum) forest and occasional cliff outcrops. The creek we swam in was a very clear, clean freshwater rainforest creek with big deep pools. People now in the City, would give their `eye’ teeth for it as my father used to say.

Hobbies …… collecting birds eggs …. Whilst at the Wilsons Creek Primary School  in the 1950’s, I began  collecting birds eggs.  Mum and I went to look at a butcher birds nest in a small tree in one of Whiteman’s paddocks below the start of where Lilly Pilly Rd. is now (the  three kilometre road down our house ).  Whiteman’s owned all the land above the main Wilsons Creek road right up to the Koonyum Range and down to the edges of Wilsons Creek itself ….. they ran a dairy farm and the paddocks were totally open grass paddocks (see the photographs above) compared to the closed-in look created by all the camphor laurels which have grown up since the early 1990’s.

With the butcher birds nest, Mum climbed up the tree and got me one green speckled egg. She showed me how to blow out the yolk with a tiny hole drilled in each end with a pin when we got home.

From then on I only collected one egg from any nest I collected from ….. which came from an unknowing conservation awareness. At the school we had a copy of Neville W. Cayley’s book ‘What Bird is That …. A Guidebook to The Birds of Australia’. This book first published in 1931 has beautiful handpainted bird illustrations with careful codes and detailed notes on bird distribution, general notes, the type of nest and eggs. In Primary School I knew this book backwards and could identify most bird species very quickly.

I have been given a present of this book in recent times and it is a very good reminder of a portion of my life in the 1950’s and 1960’s. I would roam cross the paddocks after school looking for nests. In the  paddock portion near Brown’s gate up near the Wilsons Creek road there was big crows ash tree.  Fig birds would have several nests in the tree on thin outer branches. I had made an egg catcher and I would climb up the tree  and and using my egg catcher, I could extract an egg from the nest.

One year a magpie made its nest in this tree. It was very protective  of its nest and swooped us all the time so we use sticks swinging around our heads when the magpie attempted to attack us. I wanted to collect an egg for my egg collection but how to get an egg from this   magpie nest?

I decided on a new strategy by building  a cardboard helmet to protect me when the magpie swooped. However I found the helmet unworkable for climbing up the tree …..you couldn’t see the next  branch very well to climb to. It was somewhat dangerous in being able to see straight.The result was I didn’t get  an egg from this magpie nest.

I still have my extensive egg collection in two shoe boxes which are divided by the original cardboard dividers and softened in a bed of cotton wool (see the photographs above). I continued collecting birds eggs right through High School which began in 1960. There were tall stringybark trees with a hawks nest and crows nest up on Whiteman’s land. Anthony Stone was one of my primary school  companions who was also into collecting birds eggs. His family lived up the track above the Wilson’s Creek Public School. I told him about the nests on Whiteman’s land  in a  tall clump of trees.

We went together and showed him where the two nests were it was all a bit of the exploration of the mysteriousness of life for me,  Anthony somehow climbed up fifty metres up the stringybark tree and got a crows egg for his collection. He put in his mouth for protection and came down tree.  I then took him across to the fence on the other side of the paddock where I showed him an eagles nest in a tree on a thin branch at the very top of the tree.

He had an egg catcher made from a long stick with a spoon, but he didn’t get any egg out of the nest. However, I got the idea for my own future egg catcher made from a ring of wire with a toe of old stocking sewn to its end. I learned how to make an egg catcher by taking a long stick and wiring on a loop of wire at one end, then sewing the cut – off toe of one of Mum’s disused stockings into the loop. I made little net at the end of the stick to dip eggs out of a nest with. I would climb up a tree where there was nest like a pee wee’s mud nest right on a thin limb. By reaching with my stick you could scoop it in the nest and take out one egg. By withdrawing the stick in, you could take out the egg and put it in your mouth and bring it down to safety on the ground.

A number of the eggs have great personal significance to me as they represented major discoveries of life and nature.

To have this still in my collection forty five years on represents some about the Wilsons Creek area. The blue crane was an elusive and furtive bird as it stalked in shallow areas of water or amongst the grass in paddocks. It had a hidden quality to it which was hard to know. Finding a nest represented finding something of this hidden quality.

I marked the spot with my eye and began steadily walking to the spot. Of course the bird became very agitated and started attacking me. Walking steadily to the spot I came a grass lined depression the ground with cluster of olive speckled 40 mm long eggs. The one in my collection is from that time.

In 2003, Gerald my brother in Sydney sent me the website for Wilsons Creek Primary School where he and I went to primary school in the 1950’s ….. at www.wilsonscrk-p.schools.nsw.edu.au/. ….. the students have designed this website with help of their teacher. I had signed the guestbook and soon after that Susan, now a retiring teacher invited me to come and speak at the school when I was down from Brisbane. In 2004, I phoned Simon Cook the new principal and asked him if I could speak on Monday the 1st of November. He said they would be glad to have me out and speak about the school 50 years on.

It was with some intrepidation yet excitement that that Claire drove me out to the school by 11. a.m. to meet the teachers and speak to the children at 11.30 a.m. Claire being a trainee teacher got me to turn my whole talk into an interaction around 5-10 questions then feed in my experiences from the 1950’s when Gerald and I were there.

I spoke to 60 children for right on half an hour …… the questions just worked wonderfully. I had dozens of hands up all the time …… many wanted to participate. I even had my old birds egg collection from 40 – 50 years ago ….. many wanted to see that at the end of my talk.

I had a piece of petrified wood I had found in the gully volcanic tuff rock wall in the early 1960’s when I found the bat cave under the cliffs where Mr. Cox’s bananas were (one of the many banana growers in the area at the time). We talked about the bat cave etc. It turned into wonderful time.

One of the things that has changed in a major way, is that there NO open space anymore …. no open cow paddocks or banana plantations … it is all closed bush ….. planted by many new owners or regrowth. Camphor Laurel trees are everywhere!! What was Brown’s road (an old couple who came on bullock tracks to Wilsons Creek in the early 1900’s) ….. is now called ‘Blackbean Rd.’ ….. you cannot see Brown’s house ….. it is all surrounded by dense trees.